"I get a lot of e-mail asking why I don't have a Facebook account; thought an explanation was in order."

According to the motion picture The Social Network, the founder of Facebook did so, not out of the kindness of his heart so that we could all share our daily lives with friends and relatives. Oh No! My friends! He did it for revenge!

Poor, sexually frustrated college student that he was, or is still, wanted to be able to go online and trash the hot babe co-eds who had the good taste not to go out with him. And, that mentality and purpose remains in effect to this day. 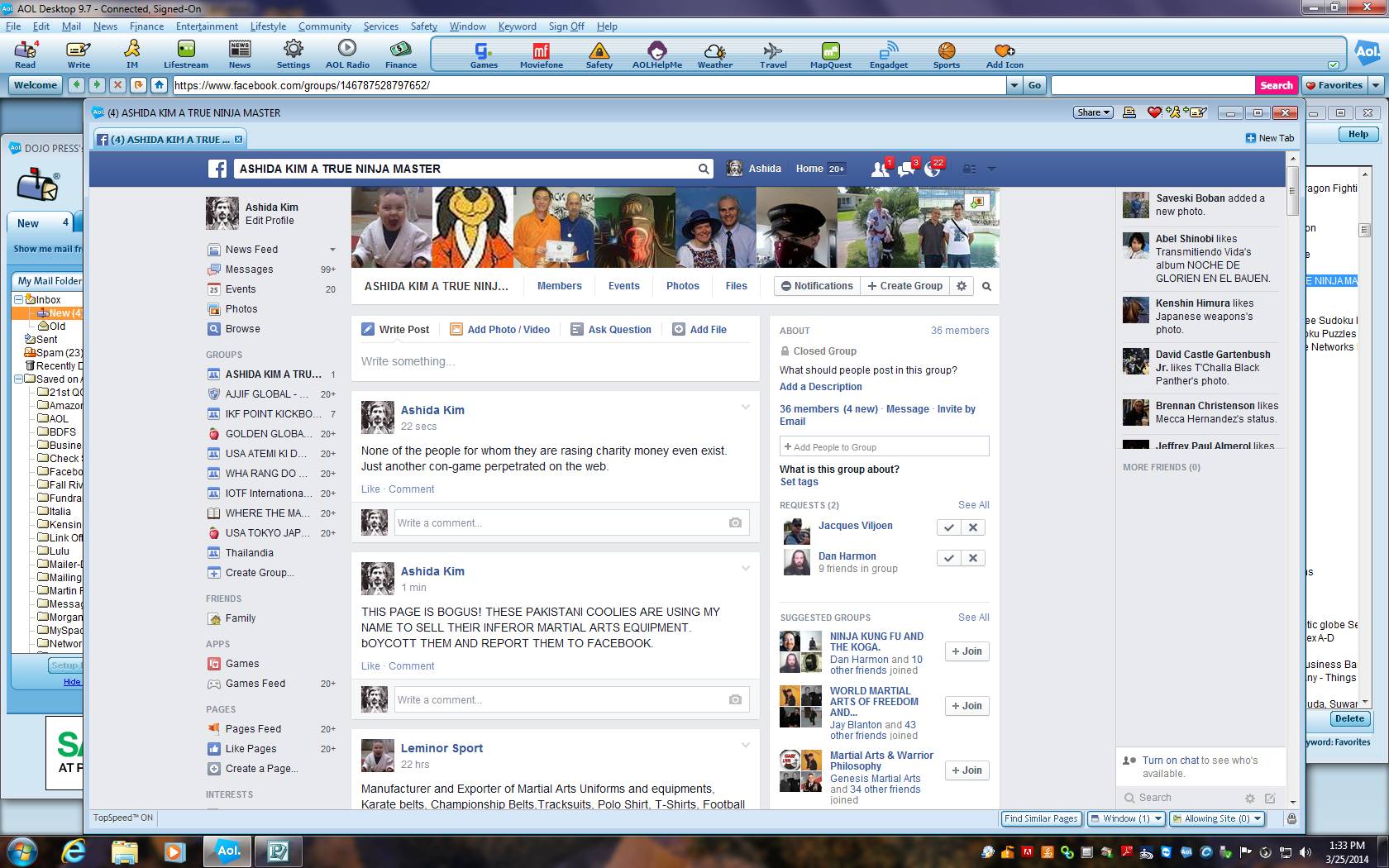 "Ashida Kim is a True Ninja Master" was advertising their martial arts products, made in Pakistan, on what was supposed to be a personal profile page. This is a violation of Facebook's Terms of Service. On its face, that should be enough to have it removed. But no! That was not enough. By using Ashida Kim's name they implied a tacit endorsement of their products. Master Kim received several complaints about the lack of service and poor quality of these goods; that was how his agents discovered this illegal activity and reported it to him.

Between the advertisements were thumbnail pictures of various martial artists, all dying of some horrible disease, complete with a PayPal link so visitors could contribute to help cover the cost of medical bills for a fellow black belt. Heart-rending stories of suffering appealing for charity. Problem was, none of these people existed. The Pakistani sellers merely took pictures of various older or women martial artists and used them without permission, giving them phony names and ranks to avoid the victim of these identity thefts from catching on that their pictures were being used. Of course, with Master Kim's name on the page, it looked like he was running a massive charity scam. He reported it to the appropriate authorities to clear his name and to Facebook.

It took six months to get the page taken down. First, because any initial report of violation is bounced back by an auto-responder. For instance, when Master Kim reported that people were impersonating him on the Facebook, the auto-responder merely replied that nothing could be done, it was simply someone with the same name. There is ONLY ONE Ashida Kim. After navigating that maze, he finally made contact with live, e-mail "tech support." At first he claimed his name was "Steven." But, we all knew it was Abdul. After several weeks of arguing and cajoling about the malicious intent of this page implicating Master Kim in their criminal enterprise, he suddenly became "Noah," a new tech support specialist who went back to saying there was nothing he could do. Master Kim confronted him. Telling him that changing his phony name just because a movie about Noah came out that same week so that we would have to start all over again was merely an exercise in frustration, used by pimps like himself to get out of doing their job and that it was time to escalate this dispute to the next level, so let's get his lame ass supervisor on the horn and get to it. By these means, he was persuaded to remove the offending page.

And the reason for this convoluted defense and refusal to do anything about these infractions? Simple, all the tech support is in Pakistan and they all work together. This site, and others like it are sanctioned by the company, otherwise they could not exist. They know where all the Jihad recruitment sites are, but they never shut them down. "Free speech! " They shout and then whisper that they are "letting them run so they can monitor what they are doing, national security--shhh!" As if a terrorist is so stupid to think his every keystroke is not being watched and recorded. Both excuses are lame. Both demonstrate a selective unwillingness to enforce their own Terms of Service.

Master Kim had the same problem in 2003-2005. back in those days, some of the tech support was still in California. Several times Master Kim actually called their offices to haraunge them for letting people impersonate him on Facebook. They just laughed. Until he told them that his name and likeness were copyrighted and that he was going to sue them for allowing these infringements to continue. About twelve pages went down that day.

See, the problem is not that they can't do their job, the problem is that they won't. They enjoy the chaos they create, foster and encourage. These guys make their money by selling YOUR personal information. Or, giving it away. Family goes on vacation, here's pictures of us at Disney World. If they can afford to fly to Orlando and go to a theme park, they probably got some money. Crooks look up their address, they know the family is out of town, they break in and rob them. More insidious than that, they sell lists of every site you visit, all your friends and contacts, so they can "market their products according to your tastes and preferences." Don't you believe it! All that stuff goes to banks, so they can send you ads for loans. It goes to car dealers so they can pitch their autos, it goes to hackers and scammers who send you malware viruses and steal your identity. Every day corporations are hacked and vital private information is stolen by computer thieves in Russia, but "no one can stop them..." whine, whine. They could be stopped if the powers that be wanted it. But, they are too busy transforming the world and getting re-elected to take care of the peasant's business or complaints. That is why you have Ninja- to kick ass and take names!

Here is "parody" page, mocking Ashida Kim. Just jealousy from lonely trolls who have never done anything constructive with their lives. 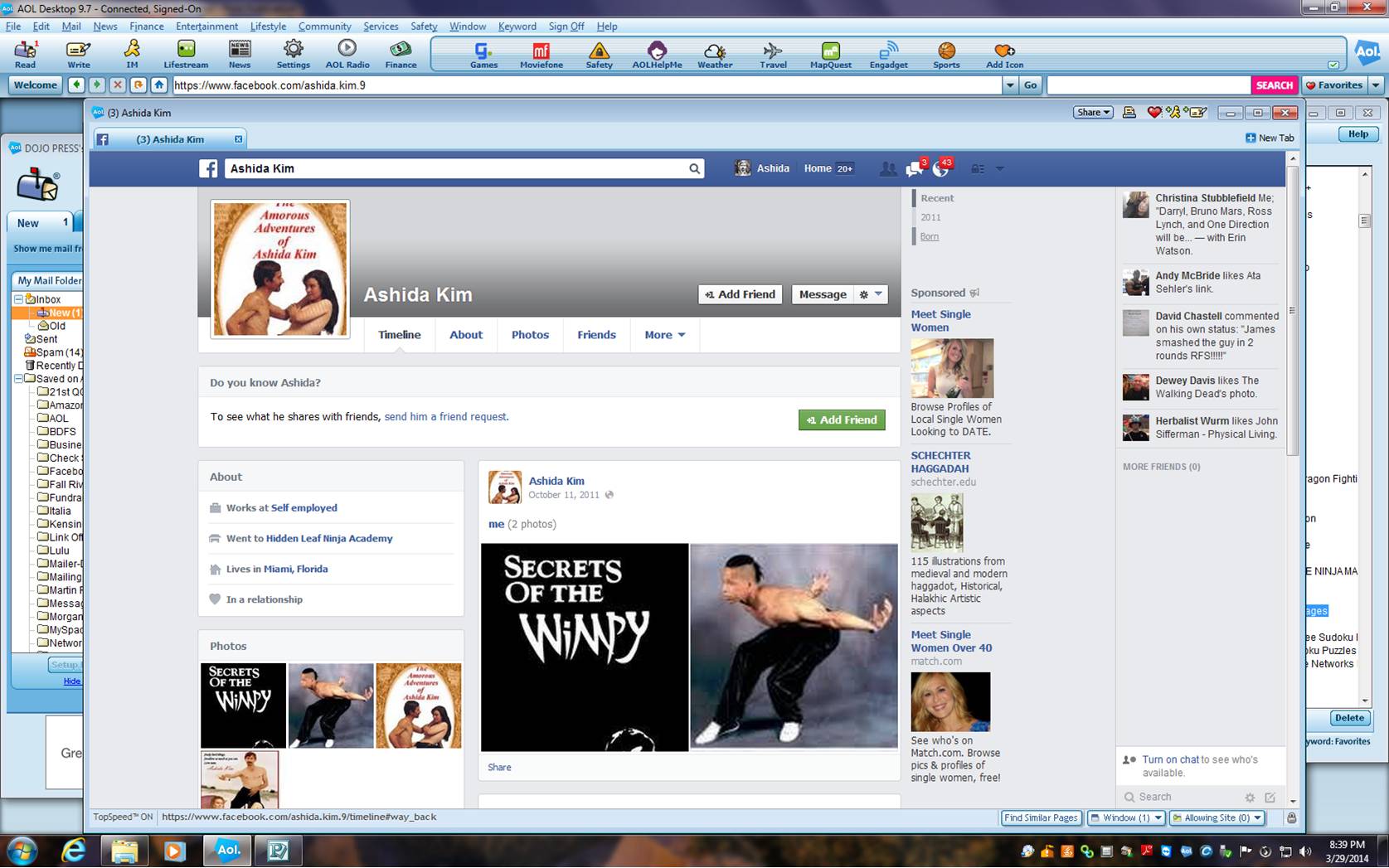 Took two months to get this one removed. Shortly after that, Master Kim noticed that his Facebook URL had changed. All of a sudden he was "ashidakim1" and when he clicked in his link he viewed his regular page. But, when he typed in "ashidakim" a totally different page, with a spooky face looking out of a mirror appeared. Only had one friend, from Guatemala. Small wonder, LOL But, this sort of change can ONLY be made at the Facebook administrative level. Supposedly, if you get too many friends, Facebook will "spill over" a page like this to accomodate the excess. But, that didn't happen. And, no changes were requested. So, it was a deliberate attack in retaliation for making them take down their buddy's phony charity page.

Back to the e-mail wars with "Steven/Noah/Abdul" and his cronies. After a few weeks, it was obvious that they were just having too much fun making excuses and taunting Master Kim. So he insulted them. So badly, that they took his page down, and all the impersonators, and banned him from having an account ever again. Not many people can do that with an e-mail.

But, they still let people impersonate him. Here is a screenshot of Ashida Kim on Facebook March 2015: 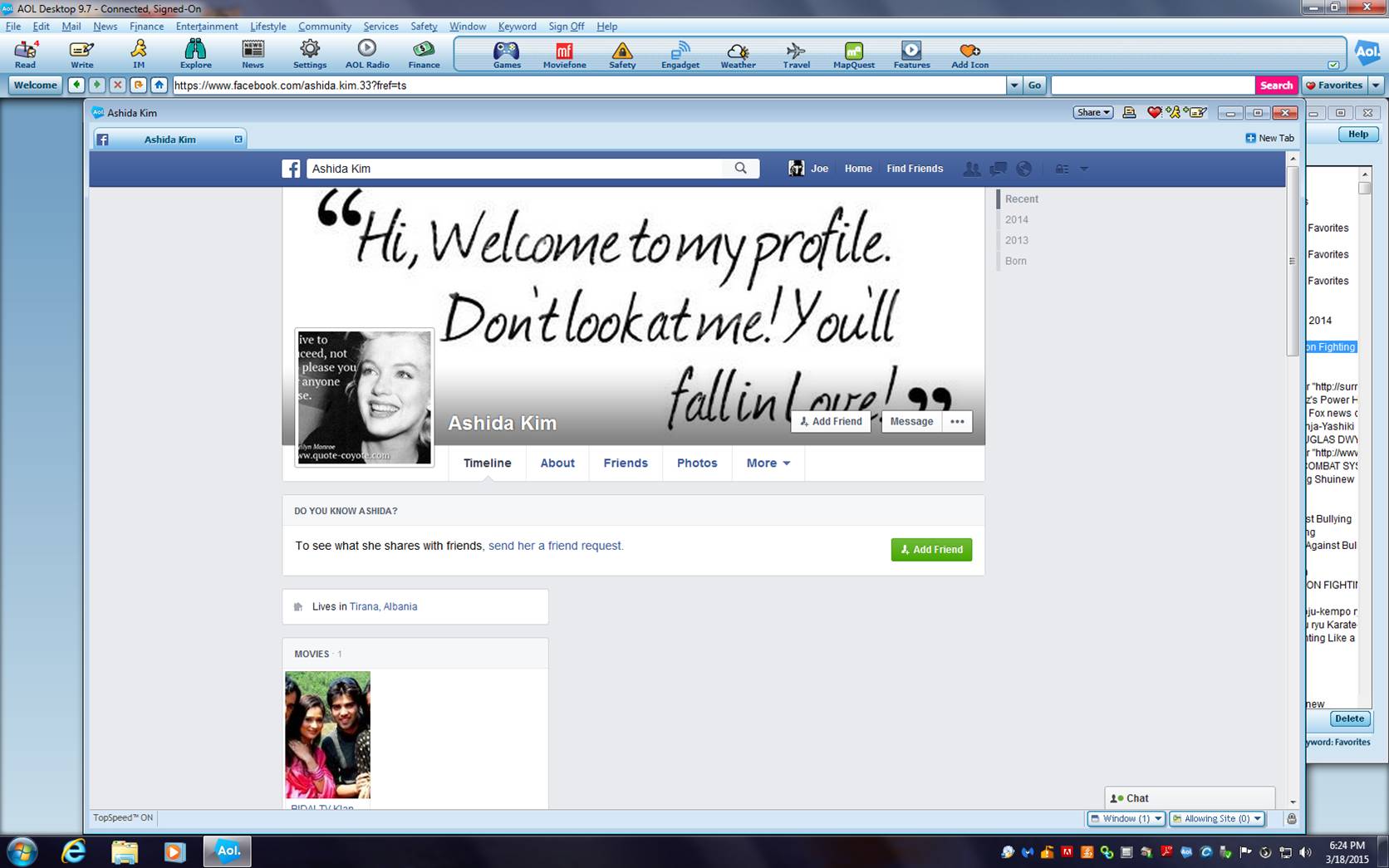 Supposed to be some girl in Albania, LOL

There is only one Ashida Kim and this is his webpage. He does not participate in any social media online except his own Message Board and Email. Any place else you see his name being used is a lie. Any place else you see his books being sold, is a lie. DOJO Press is the ONLY authorized source for Ashida Kim books and vidoes. All others are thefts of his intellectual property. Facebook is populated by and is the playground of bullies. There a MANY stories of teenage girls and even grown men being driven to suicide by taunts and gossip from "friends" on Facebook that they cannot block because that function is a joke, and cannot report because that function is a auto-responder. There is no oversight, except to make sure that whistle-blowers like Master Kim are stifled.

Here is a page proclaiming "Ashida Kim the Ninja Grandmaster and Greatest Killing Machine of All Time!" 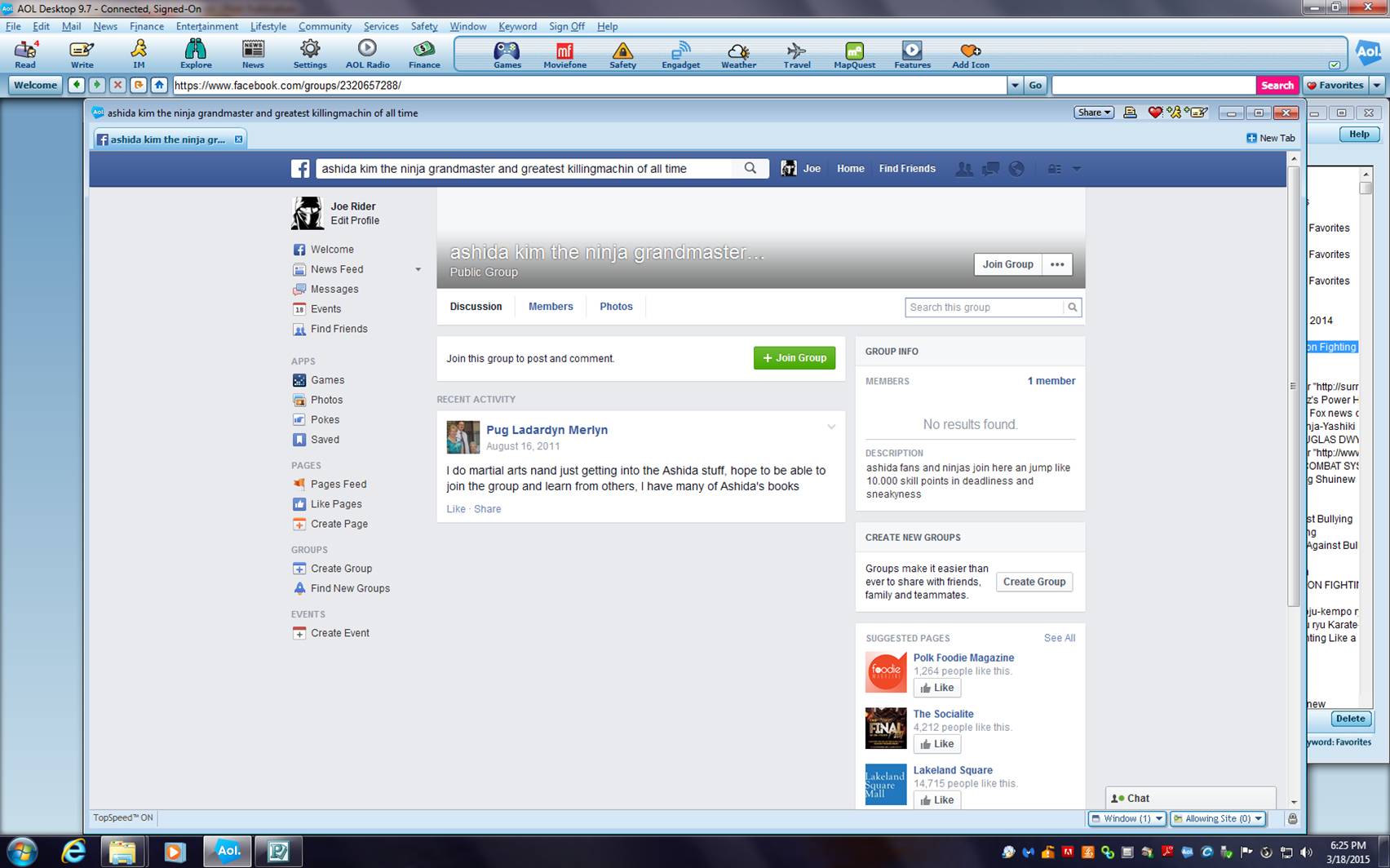 Master Kim has never claimed to have killed anyone. In fact, the entire message of all his books is non-violence. We already know from past experience that it would do no good to report this page. Not the fact that it is a lie, that it uses Master Kim's name without permission, that it is demeaning to his reputation and accusing him of brutality and wrongdoing without any evidence or justification is slander and libel; none of that matters! Because the pigs of the world are in charge, the inmates are running the asylum. up is down and sideways is straight ahead. The truth means nothing. Duty? Honor? Justice? These are just "buzzwords" used by salesmen to trick you into slavery. Striving to better oneself. Wanting to do the right thing, to share and help people: these things are discouraged. Fair play, honesty equal treatment under the law, just myths in the illusion of freedom.

So, next time you go on Facebook, just know they are watching you. They are "data-mining" every scrap of psychological profiling information they can, the better to manipulate your every thought and deed. These people are not your friends, they are "wolves in sheep's clothing." They are feeding upon your kindness and fellowship and laughing at you in their arrogance. We, humans in the act of being, are better than this. We are worth more than this. We deserve better than this. That is why Ashida Kim does not appear on Facebook.